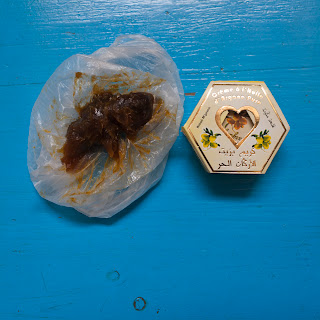 Have you ever been to a hammam?  My generous host in Taroudant, Fatima, took me to one while I stayed with her.  She said it was a must-do, and I was quite intrigued.  I really had no idea what it was, all I knew was that it was some kind of bath house.  I suppose I could've researched it, but I really prefer to let experience, rather than Google, guide me.  I immediately pictured low lights, relaxation, massage, maybe even some flowers and candles. Definitely good smells, of course. I don't know where I got that idea, but if you have been to a hammam, you're probably laughing to yourself right now.  That is most definitely NOT what it is.
(After writing this post, I decided to Google a Moroccan hammam. Now I don't feel like such an ass for thinking it'd be a spa haven.)

I was surprised by the heat, volume, crowds, lack of flowers, amounts of skin and hair on the floor, people sitting in said skin and hair. But what was most surprising was that I learned apparently I'm not strong enough to scrub myself properly and there is no shame in Moroccan culture when it comes to helping a sister out.  I was not removing the appropriate amounts of skin from my body, so Fatima took my scrubby glove right off my hand and scrubbed me down raw.

It was weird. I'm in my late 20s. No one has bathed me in decades.  I got slapped in the face with her boob when she bent over.  Girl on girl boobs?! I know what you're thinking. Not sexy in this case, I promise.

Despite the lack of sexiness, it was a great experience.  Moment-to-moment, I wanted to get out of there more than I wanted to be there, but in retrospect, I like pushing the limits of my comfort zone, especially if I'll learn something.  Women seemed pretty oppressed in traditional Moroccan culture, and the hammam was a place where they could just be - they could be loud, exposed, gossip, laugh, and who knows what else goes on in there that can't happen on the streets.   I had never really considered other culture bathing techniques and certainly did not expect that anyone would scrub themselves raw regularly.  But let me tell you - beautiful skin all around!!!  It was also interesting how much I was openly stared at, especially by the kids - it later occurred to me that they had probably never seen a body with tanlines before since they don't show anything but their face and hands outside, and sometimes not even that.

Anyway, I'm babbling now, but I wanted to share one of the most culturally enlightening experiences from my trip.  The photo shows two hammam products.  The one on the right is argan cream.  Leave a comment to guess what the one of the left is - without googling!!