An admirer gave me these at the bar and totally made me blush, even though he was probably 92 years old: 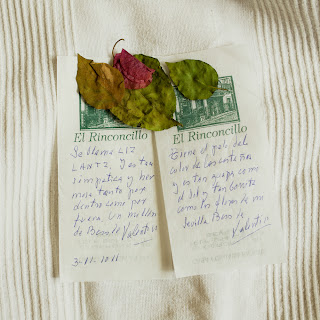 Well, I had to make a picture of him, so I went to talk to him and I told him my name and offered to take a photo with him and send it to him later if he gave me his address.  We took photos, then he handed me the napkin on the left, and the flower petals, before we walked out:  Her name is Liz Lantz, and she is so nice and as beautiful inside as she is on the otuside. a million kisses, Valentin

Ha! I was flattered :)  I have a feeling I'm not the only one getting barside love notes and flowers from Valentin (um, he had a supply of petals and leaves on his table) but it was still really nice and blush-inducing.
Email Post
Labels: Euro-tour Sevilla Spain