I'm still on a brief hiatus from making photographs and instead enjoying time with family, friends, and nature. I'll be back soon but in the meantime, you should know my work will be in a group show opening July 11th and running through August 29th.

I am so honored to have my work hanging on the walls of Joseph Bellows Gallery, especially alongside photographers such as Alex Webb, Edward Sturr and Virginia Beahan. Below is the official press release. I hope you can make it out to see the exhibition while it's up. 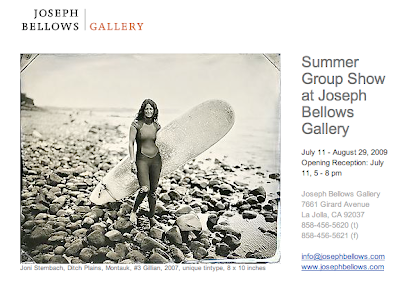 The exhibition will include two contemporary San Diego photographers: Bill Rastetter and Liz Cockrum. Rastetter's ongoing Seascapes Series, which consists of images shot in La Jolla, California and Hawaii, captures the ocean at night. Using 4 x 5 inch color transparency film and time lapse photography, with exposures lasting between one and eight minutes, the oceans become more abstractions than literal landscapes. The loss of wave structure creates an abstraction that one might ordinarily associate with a watercolor painting rather than a photograph. Rastetter's minimal and often surreal seascapes capture views of the ocean not normally accessible to the naked eye.

Liz Cockrum's ongoing series called Sirens focuses on the lifestyle and culture of female surfers. By documenting women in spaces outside of the water, Cockrum's images go beyond the typical representation of women in surfing and show the softer side of surf culture. Her photographs show how this culture is infused it into her subjects' daily lives and personal spaces. Like Cockrum, photographer Joni Sternbach makes portraits celebrating surfers and surf culture. Combining a 19th-century process of tintype with a contemporary subject, Sternbach's surfer subjects, photographed on the beach or near the water, seem both current and timeless.

We will also feature work from Virginia Beahan's recent book CUBA: singing with bright tears, which is the culmination of the artist's seven-year project photographing the social and political landscape of Cuba.

Also included in the exhibition are vintage prints of beach landscapes by Brett Weston and Paul Capongiro and photographs of Coney Island in the 1960s by Stephen Salmieiri. Photographs by Alex Webb, Chip Hooper, Edward Sturr, William Dassonville, and Pirkle Jones will also be included.